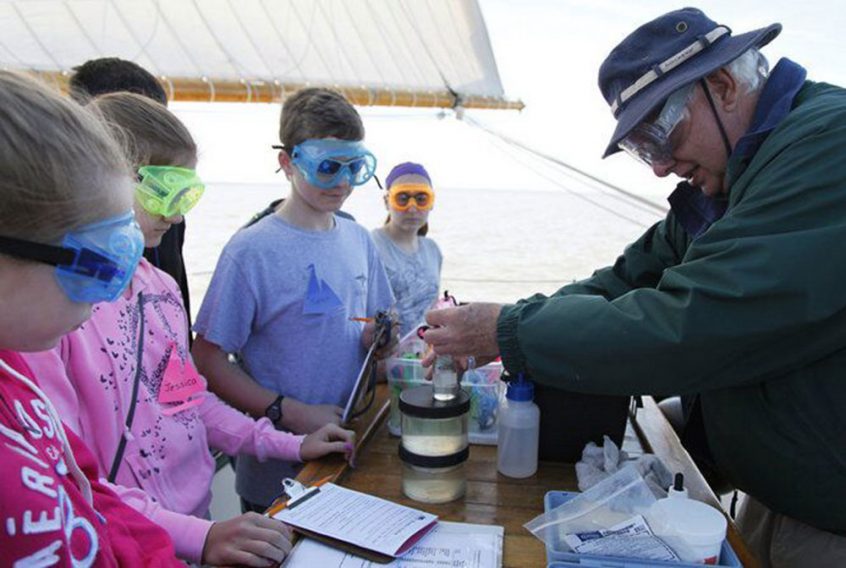 The Appledore IV began her sailing season a little early this year on April8th hosting a group of volunteer shipboard educators for a half-day training sail. Less than a week later the crew and shipboard educators welcomed a group of 4th graders from St. Robert Catholic School in Flushing, MI aboard for the first Science Under Sail of the season.

At the end of April, Appledore IV made way for Detroit, Michigan. During her weeklong visit students from Detroit Public Schools Community District and Barth Elementary in Romulus, MI participated in Science Under Sail programs on the Detroit River. We also welcomed aboard three groups of local history buffs participating in a special sail hosted by Detroit History Tours.

After departing the Port of Detroit, Appledore IV made way for Port Austin, Michigan. Three additional schools from Michigan’s thumb region participated in education programs from there. Finally, to wrap up a whirlwind season kickoff, Appledore visited East Tawas, Michigan where four groups from Tawas Area Schools climbed aboard for a Science Under Sail in Tawas Bay.

On Monday, May 8th, the Appledore IV, her crew and shipboard educators will begin welcoming classes aboard from our homeport of Bay City.

Program dates are still available for Spring 2017 and Fall 2017. Contact Autumn Mitchell at program@baysailbaycity.org or (989) 895-5193 for more information.